Summit Height 415 Metres
Phone access is excellent.
Activation period 4.5 hours plus setup. 20 logged contacts
Access via Gembrook and the Gembrook to Tonimbuk Rd but home via the Tynong North Rd as I wanted to look at a potential route to Dingo Hill.
Travel time much the same albeit I expect the Princess Freeway rout home would have been quicker than the Sunday Afternoon Drivers often found in the Dandenong Ranges (About 1 hr and 30 minutes from home) 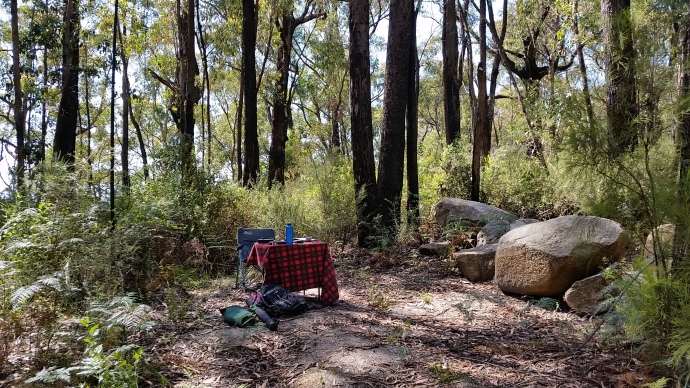 A day at the office?

It is not often that I activate with the luxury of my own table and chair plus thermos and lunch.
Lunch is more often on the run whilst heading to the next summit so, like Mt. Little Joe, it can be nice to take things at a much slower pace.

The going was quite slow. Only three contacts on 40m cw and those were Steve VK7CW pre and post roll over plus Gerard VK2IO/P. (This also reflects the 12/12/2015 activation date above!)
A solid 30m SSB contact followed with Andrew VK1AD/P who was also in contact with Peter VK3PF.
Tried Peter on 30m CW (he was 519 to me) without success. Worked Peter on 6m CW 559.
After this 30m SSB with Nev VK5WG and VK2XXM Rob plus Matt VK1MA and CW with Ian VK5IS.
Last 30m contact was at 0119 hrs and the first 10m Es contact was at 0136 hrs resulting in 4 JA contacts in about 25 minutes. It took some effort to make these contacts and I did try many more both CW and SSB. Many of the operators (non JA) were not that interested in persisting with a weak 10 watt signal when there were plenty of 5×9 ones on offer. The successful stations were all quite strong at my end.
0240 hrs had a quick qsy to 40m ssb for an S2S with Ian VK1DI/2 then at 0303 hrs I tail ended a qso and worked Brian VK4EK on 6m ssb my report 5×2.
0329 hrs worked Ian VK5CZ on 10m CW followed by a sota watch liaised contact with JS1UEH/1 (also on 10m CW) 519 both ways.
Very pleased with the 10m CW S2S contact with Takeshi who I have now chased many times but mainly on 15m. Takeshi moved up from 15m to work me. His 15m signal was probably 319 and I have worked him previously on similar signal levels but I could not break through his other callers. The 519 10 metre reports were vastly better.
Finished up with local contacts on 6 and 10m SSB plus Glen VK4FSCC on 10m SSB at 0413 hrs
Closed up at 0426 hrs
In summary, I tried all bands from 40 through to 6 metres except for 12 metres.
There were no local 40m NVIS signals earlier in the activation and all signals heard on 10m from JA, NA, VK were very readable but weak 5×1.
Propagation certainly altered during the day and it paid to concentrate on just a single summit.

Power levels from the KX3 were generally around 8 watts. The doublet antenna (20m extended double zepp) was used on all bands and with 10 metres, I experimented with its orientation to determine best performance.
I originally had it set up on a rough north west / south east alignment running sort of parallel with the road and changed this to being more across the road and 90 degrees opposite (beyond the locked gate).
I was not surprised to find the signal levels to JA were significantly better with the first set up.
I did not get a great match on the bottom end of 6 metres and am thinking of trying it in a folded dipole arrangement or extending the legs a bit?

FYI, the last few nights have seen good local single hop 6m ES and double hop ES to VK8. Also 49.750 Eurasian video S9 plus a number of JA stations via TEP on SSB and phone. Often these TEP signals need an ES extension to get down into VK3 and VK7. Home station =  FT847 and 6 element 6m Yagi at 15 metres
Until the next summit, Tony VK3CAT