The week leading up to this weekend (14th & 15th of May) had been quite wet. The weekend itself was looking OK with Saturday being the pick of the days. A good opportunity to pick up some local summits, last activated Australia Day 2015 marked by an unexpected incident near Hyde Hill.
Following the same route as previous, I headed out through Wandin and Yarra Junction along the Warburton Hwy. Progress on the Warburton Hwy in the early morning was quite good but be warned. There are numerous traffic speed restrictions through the town ships and beyond that can make the going quite slow. Also a magnet for traffic cameras.
Turn off at the Old Warburton Hwy between Yarra Junction and Wesburn then look out for the Mount Bride Road, if heading east, located on a left hand bend from the Old Warburton Hwy. A short distance up the road is Burns Rd (seasonally closed). In winter you will not proceed past the gate but other times there is access to the old fire trail that heads along the Mt. Bride divide. In the dry this short section of Burns Rd would be trafficable in a 2WD but not this day, being very sloppy in the dip past the gate. There is adequate space to park a vehicle adjacent to where the Mt. Bride trail heads off to the east.

Activation time 26 minutes.
Good phone access.
I was set up & operational just prior to my alert time and promptly had VK2GAZ, VK7CW, VK3ARH & VK2IO in the log on 40m CW and VK3PF on 80m CW inside of 10 minutes. Not great Near Vertical Incident Sky Wave propagation. Struggled with a XMode contact with Rik VK3EQ/P at Warragul and VK1MA – both on 40 metres SSB (15 minutes for these last two phone contacts shows just how good CW can be in patchy conditions!)
Packed up prior to UTC roll over and headed towards the next one.

Last time I was able to drive right up close to the activation zone & I was hoping to do the same this time. If it had been dry it would have been easy, in the still damp conditions it was anything but. I had already deflated the tyres when I hit the Britannia Range Track a little further south off the Mt. Bride Rd. It looked (and was) greasy – the surface being wet clay. Compressor was on and the front and rear diff locks soon engaged. An interesting ride part way up. Being solo, I abandoned the idea of driving up all the way when I got to the last little incline that looked nasty. Was able to turn around and park off the side of the track and walked the rest of the way.
I am not convinced the nominated height of the Britannia Range summit is correct? There is certainly a discrepancy between Forest Explore and the Garmin maps and the nominated height. Following up on my prior activation, I intended to investigate further!

It looks like a small section of Britannia Range Track enters the activation zone if the nominated height is 815 metres but the aforementioned map shows the summit being above 820 metres & by Garmin 10 metre contours, above 830 metres but below 840 metres. Forest Explorer has it between 810 & 820 metres.

This means the Britannia Range Track is NOT inside the activation area; missing out by a whisker!
Now, GPS altimeters are far from accurate so I decided this time to head to the top.
There is a very overgrown 4×4 track that heads towards the summit off the Britannia Range Track. This stops in a small clearing above the 820 metre contour level (Garmin). Proceeding further was a bit of a bush bash. I estimate that I got to within a couple of metres from the top (hard going) From this point I measured a 24 metre altitude change from where I had left the Britannia Range Track and thus I estimate the summit to be at 839 metres by Garmin Contours. Conclusion is that (using Forest Explorer), the summit is closer to 820m than 815m?

CW only, worked VK2GAZ / VK2FDU (Fists Down Under), VK2IO & VK3PF on 40 metres. Got Gerard VK2IO again on 20 metres and John ZL1BYZ on 15 metres.
Discovered that I had picked up some leeches on my bush bash. Not the most conducive thing to find whilst on the key! A few on my clothes and 3 puncture marks on my hip. Glad they did not get any lower down! These became large welts during the following week but all clear now!
To the next summit!
Very slippery on the way down. Had to stop for some vehicles coming up – going side ways!

What a difference a year or so makes with logging regrowth! Last time I parked at the junction of Black Sands & Big Creek roads and headed up through moderate growth along logging access paths and up to the edge of the logging area that was inside the activation zone. This was not going to happen this time. Instead, I parked on Black Sands Rd right on the edge of the logging & forest boundary and followed the cut line up. This turned out to be reasonably simple with only a few detours required. Forest Explorer has the summit above the 900 metre contour, Garmin has it above 910 metres. I followed the cut line to above the 880 meter contour and set up.

Plenty of room for the doublet, following the cut line in a north / south line giving broadside radiation to the east and west.
Worked VK3PF, VK2IO, VK7CW, VK3YY on 40 metres CW and ZL1Byz, VK3AFW & VK6NU on 20 metres CW. Put out a few calls without spotting on 40 metres phone without a response.
Back down to the car and to the final summit, passing the scene of the rollover of last year when, I had contemplated, the possibility of a 4th summit before things happened!

Lots of logging activity in this area. Timber Harvesting Zones along Outlook Rd and Limberlost Rd. Roads can be closed at any time without notice.

Access is straight forward along the walking track. This starts off as a very overgrown vehicle track fro where the walking path diverges up to the south. The path as shown on Garmin V5 Topo map is quite accurate. It is identified with occasional blue and orange  tape tied to trees but does involve some dead reckoning and bush bashing.
This time I went right to the top where there is a large flat rock and small stone cairn. No issue with the activation zone here. Garmin mapping is consistent with the nominated summit height.
Strapped the squid pole to a short tree and got on air. Looks like the broadside antenna radiation was North east and south west so not ideal for Long Path to Europe!

Began with Rik VK3EQ/P and Mitch VK3XDM/P on Mt. Worth for 2 x 40 metre phone summit to summit contacts before working Ian VK5CZ/P on Hallet Hill north of Adelaide on 40 metres CW.
Worked the usual suspects on CW but this time including Rick VK4RF and a surprise from David VK3ANP near Wangaratta. Best contact was John VK6NU on 15 metres CW.
I could hear Mick 2E0YYY/P quite clearly on 20 metres phone and tried for some time for a contact. Signals peaked close to 06:00 hrs utc and, with time marching on, I packed up at 06:20 hrs.

The track back down was not as easy to follow as on the way up and I diverged too far to the west, using the GPS track to correct my travel so as to pick up the old 4WD track back to the car. Missing the 4WD track would not be a good thing. Vegetation is quite dense and lots of really big slippery rock inclines to fall from!
Met a fella from the logging area where I had parked the car. Not sure what he was up to but he was interested that I had been to the summit. Spion Kopje is Dutch African for Spy Rock.
Back at the car, I headed home via Limberlost Rd and past Mt. Beenak. Not sure if this was a great idea as it got me into Timber Harvesting Zones on the wrong side of some gates. In the end, one gate was simply a plastic fence which I drove over (as others had done) to get out. Good mapping and some local knowledge saved the day but some time was wasted in detours and was not so easy in the now dark conditions.
Home via Gembrook just before 7:00 pm local.

What the heck has Marilyn Monroe got to do with Radio and Communications?
A very good question to ask.
Read on….

With Nan being a NGV (National Gallery of Victoria) member, I could not ignore the invitation to nip up to Bendigo to view the Marilyn Monroe Exhibition held at the Bendigo Art Gallery. We have been to most of the similar events held here and they have been a good day out with the exhibition followed by lunch.

We had an early start from home, the weather was inclement but arrived with some time to spare in Bendigo prior to the 10:00 am opening. Being able to pre-purchase tickets for a nominated time certainly helps avoid the queues. At an earlier event, we had spent some hours queued up in the hot sun waiting to get in. Lessons have been learnt!

Anyway, we enjoyed the exhibition. Turns out Marilyn was no dummy when it comes to business and marketing. She was also a tiny woman going by her dress size. Lots of sound and movie clips on offer including “Diamonds are a Girls Best Friend”

We had a stroll through the shops and noted that it seemed quieter than previous times and a number of shops were closed or gone completely.Lunch was had at a cafe across the road. Nan & I have been together for too long as, again, we both independently ordered the same meal! Over lunch, the rain bucketed down. Not looking promising for the afternoon’s activities?

Located to the east of the Calder Fwy on the way home, it was but a slight deviation – made longer by some road works on McIvor road requiring a detour via Harcourt. The approach was straightforward along Joseph Young Drive to a T intersection where you turn right to reach the summit just a short distance away. There is a well constructed stone cairn at the summit but I elected to activate from near the T intersection as it would be a bit more out of the way and possibly RF quieter?
The activation zone looks quite vast and the south Trig point would also be inside the zone.
Also, noticed lots of moss & lichen on the road on the way up. Looks like it is cold in winter and also slippery! No problems this time in the mighty VW Caddy.
Commencing the ascent, we could not see the summit for the clouds. The rain had stopped but I was prepared to use the new Bothy Bag. 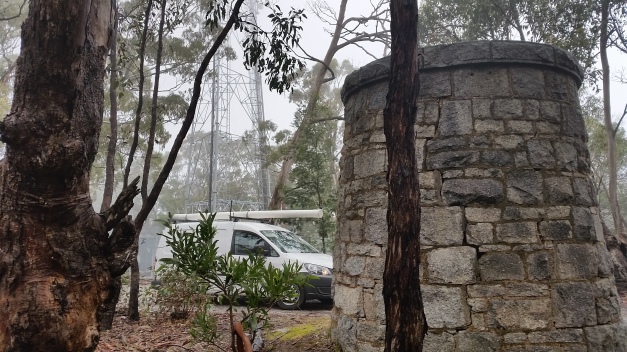 Was not too bad once at the top and things only improved!
Mountains are this cats best friends!

Phone coverage Excellent
RF noise – none to speak of.
Drive up summit and lots of places to activate from.

A slightly different method of operation this time. First checked out the band propagation then tried 20 metres first. Scored well with my first east European chasers plus ZL & VK7.
Followed this up with some further afield (plus local) VK contacts before hitting the usual 40 meter hustings. 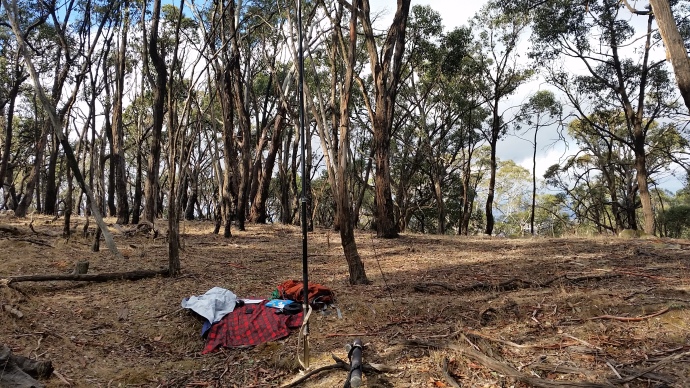 Quite happy with the results in about an hours worth of activation time.Packed up and proceeded back to the Calder Fwy near Elphinstone.
Only hiccup was the traffic through King St in Melbourne CBD. This seems to be a worsening problem with even the off ramps from the Westgate Fwy (if taking the Bolte Bridge or Western Ring Rd / Geelong Fwy) presenting major traffic congestion at most times.